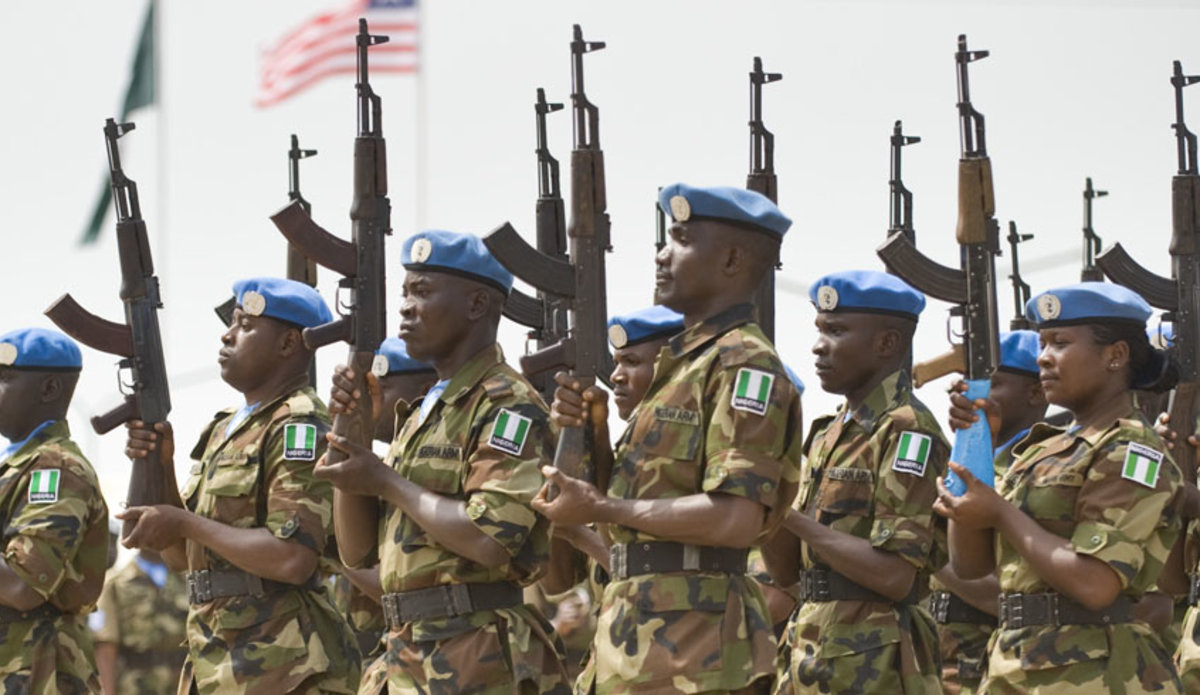 Peacekeepers from Nigeria serving in UNMIL

Liberia, the first independent African state, went through two civil wars spanning over 14 years between 1989 and 2003. Civil war in Liberia claimed the lives of almost 250,000 people - mostly civilians - and led to a complete breakdown of law and order.

The Economic Community of West African States (ECOWAS), the Nations Observer Mission in Liberia (UNOMIL) and the United Nations Peace-building Support Office in Liberia (UNOL) made several interventions during the conflict to bring peace.

(UNMIL) was deployed in October 2003 in accordance with Security Council resolution 1509(2003), after the signing of the August 2003 Comprehensive Peace Agreement. The mission had initial troop strength of up to 15,000, including 250 military observers, 160 staff officers, up to 875 UN police officers and an additional five armed formed units each comprising 120 officers, and a significant civilian component and necessary support staff. The mission is currently implementing a phased drawdown of troops and gradual handover of security responsibilities to the Government of Liberia. The Government of Liberia will assume full security responsibilities no later than 30 June 2016. By 30 June 2016, as per SecurityCouncil Resolution 2239 (2015), UNMIL’s authorized military strength will be reduced to 1,240 military and 606 police personnel.

Civil war in Liberia claimed the lives of almost 150,000 people—mostly civilians—and led to a complete breakdown of law and order. It displaced scores of people, both internally and beyond the borders, resulting in some 850,000 refugees in the neighbouring countries. Fighting began in late 1989, and by early 1990, several hundred deaths had already occurred in confrontations between government forces and fighters who claimed membership in an opposition group, the National Patriotic Front of Liberia (NPFL), led by a former government official, Mr. Charles Taylor.

From the outset of the conflict, a subregional organization, the Economic Community of West African States (ECOWAS), undertook various initiatives aimed at a peaceful settlement. The United Nations supported ECOWAS in its efforts to end a civil war. These efforts included establishing, in 1990, an ECOWAS’s observer force, the Military Observer Group (ECOMOG). The Security Council in 1992 imposed an arms embargo on Liberia, and the Secretary-General appointed a Special Representative to assist in talks between ECOWAS and the warring parties.

After ECOWAS brokered a peace agreement in Cotonou, Benin, in 1993, the Security Council established the United Nations Observer Mission in Liberia (UNOMIL). Its task was to support ECOMOG in implementing the Cotonou peace agreement – especially compliance with and impartial implementation of the agreement by all parties. UNOMIL was the first United Nations peacekeeping mission undertaken in cooperation with a peacekeeping operation already established by another organization.

Delays in the implementation of the peace agreement and resumed fighting among Liberian factions made it impossible to hold elections in February/March 1994, as scheduled. In the following months, a number of supplementary peace agreements, amending and clarifying the Cotonou agreement, were negotiated. With the ceasefire in force, the United Nations successfully observed the conduct of the elections in July 1997. Mr. Charles Taylor was elected President. Following his inauguration on 2 August 1997, President Taylor formed a new Government and announced a policy of reconciliation and national unity. UNOMIL’s principal objective was achieved.

With the full support of the Security Council, UNOL facilitated the promotion of national reconciliation and good governance and helped mobilize international support for the implementation of reconstruction and development programmes. In the most recent period, UNOL worked to fulfil the terms of a revised mandate, approved by the Security Council on 23 April 2003. Under the terms of that revised mandate, and in addition to its initial tasks, UNOL was to focus on assisting the Government of Liberia in addressing its expressed capacity needs in the areas of human rights and the conduct of elections, as well as on developing a peace-building strategy integrating political objectives, programme assistance and human rights considerations.

However, the peace-building efforts of UNOL were seriously hindered by the inability of the Government and opposition party leaders to resolve their differences over key issues of governance. Meanwhile, the promotion of national reconciliation was undermined by systematic abuses of human rights, the exclusion and harassment of political opponents and the absence of security sector reform. These elements contributed to the resumption of civil war in Liberia, prompting the international community to call on the warring parties to seek a negotiated settlement of the conflict.

On 8 July 2003, as fighting between Government forces and various warring factions intensified and humanitarian tragedy threatened, the Secretary-General decided to appoint Jacques Paul Klein of the United States his Special Representative for Liberia [S/2003/695] . He was entrusted with the task of coordinating the activities of the United Nations agencies in Liberia and supporting the emerging transitional arrangements. On 29 July, the Secretary-General outlined a three-phased deployment of international troops to Liberia [S/2003/769] , leading to a multidimensional United Nations peacekeeping operation. He also indicated that, in view of the appointment of Mr. Klein, and the envisaged establishment of a United Nations operation in Liberia, the mandate of UNOL would naturally have to be terminated.

Since that time the situation in Liberia has developed rapidly. On 1 August 2003, the Security Council adopted resolution 1497 (2003) , authorizing the establishment of a multinational force in Liberia and declaring its readiness to establish a follow-on United Nations stabilization force to be deployed no later than 1 October 2003. On 18 August 2003, the Liberian parties signed a Comprehensive Peace Agreement in Accra. By that Agreement, the parties requested the United Nations to deploy a force to Liberia under Chapter VII of the Charter of the United Nations to support the National Transitional Government of Liberia and assist in the implementation of the Agreement. With the subsequent deployment of the ECOWAS Mission in Liberia, the security situation in the country improved.

For the more complete account of the events leading to the establishment of UNMIL, including the 11 August resignation of President Charles Taylor and the peaceful transfer of power in Liberia, please look up the report S/2003/875 of the Secretary-General.

As requested by the Security Council, the Secretary-General submitted on 11 September a report [S/2003/875] providing update on the situation in the country, and containing his recommendations on the role the United Nations could play to facilitate the effective implementation of the Comprehensive Peace Agreement, as well as on the size, structure and mandate of a peacekeeping operation in Liberia.

The Secretary-General recommended that the Council, acting under Chapter VII of the United Nations Charter, authorize the deployment of a United Nations peacekeeping operation with a troop strength of up to 15,000, including 250 military observers, 160 staff officers, up to 875 UN police officers and an additional five armed formed units each comprising 120 officers, and a significant civilian component and necessary support staff.

The Mission would be headed by the Special Representative of the Secretary-General, who would have overall authority for the activities of the Mission and of the United Nations system in Liberia. The Special Representative would be assisted by a senior management team consisting of, among others, two Deputies, a Force Commander with the rank of Lieutenant General, and a Police Commissioner.

A senior gender adviser, with staff, would be part of the Office of the Special Representative of the Secretary-General to undertake and support gender mainstreaming within the various pillars of the Office and with civil society and other external partners. An HIV/AIDS policy adviser, with supporting staff, would also be attached to the Office of the Special Representative, to coordinate activities in the Mission area for the prevention of HIV transmission among civilian and military personnel and host communities.

The Secretary-General proposed that the mandate of UNMIL would be to support the National Transitional Government of Liberia and the other parties in the effective and timely implementation of the Comprehensive Peace Agreement; to monitor adherence to the ceasefire agreement of 17 June; to assist the National Transitional Government in extending State authority throughout Liberia; to provide security at key government installations, in particular, ports, airports and other vital infrastructure; to ensure the security and freedom of movement of United Nations personnel; to facilitate the free movement of people, humanitarian assistance and goods; to support the safe and sustainable return of refugees and internally displaced persons; and to protect civilians under imminent threat of physical violence in the areas of immediate deployment of United Nations formed military units.

In addition, the force would advise, train and assist the Liberian law enforcement authorities and other criminal justice institutions; assist the National Transitional Government in the implementation of a disarmament, demobilization and reintegration programme; guard weapons, ammunition and other military equipment collected from ex-combatants and assist in their subsequent disposal or destruction; assist in the preparation of elections; monitor and report on the human rights situation and provide training and capacity-building in the field of human rights and child protection; provide support for gender mainstreaming, including training; support the establishment and operations of the Truth and Reconciliation Commission; and cooperate with ECOWAS, the African Union and the United Nations on cross-cutting political and security issues.

In his report the Secretary-General observed that the transfer of power from President Charles Taylor to Vice-President Moses Blah and the signing of the Comprehensive Peace Agreement by the Liberian parties offered a unique window of opportunity to end the suffering inflicted on the people of Liberia and to find a peaceful solution to a conflict that had been the epicentre of instability in the subregion. While the United Nations and the international community at large stood ready to support the Liberian peace process, the effective and successful implementation of the Peace Agreement remained the primary responsibility of the Liberian parties themselves, he stressed.

On 19 September, the Security Council unanimously adopted resolution 1509 (2003) welcoming the Secretary-General’s report of 11 September 2003 and its recommendations. It decided that UNMIL would consist of up to 15,000 United Nations military personnel, including up to 250 military observers and 160 staff officers, and up to 1,115 UN police officers, including formed units to assist in the maintenance of law and order throughout Liberia, and the appropriate civilian component. The mandate of the Mission was established for a period of 12 months. The Council requested the Secretary-General to transfer authority to UNMIL on 1 October from forces led by ECOWAS, which it commended for its rapid and professional deployment. Among other things, the Council also took note of the intention of the Secretary-General to terminate the mandate of UNOL and to transfer the major functions performed by that Office to UNMIL.

As scheduled, UNMIL took over peacekeeping duties from ECOWAS forces on 1 October. Some 3,500 West African troops who had been serving with ECOMIL vanguard force were provisionally “re-hatted” as United Nations peacekeepers. In a statement issued on that day, the Secretary-General welcomed this very important development and saluted ECOWAS for its role in establishing the security climate that paved the way for the deployment of UNMIL. He commended the Governments of Benin, Gambia, Ghana, Guinea-Bissau, Mali, Nigeria, Senegal and Togo who have contributed to UNMIL, as well as the United States for its support to the regional force. The Secretary-General expressed confidence that UNMIL would be able to contribute in a major way towards the resolution of conflict in Liberia, provided all parties concerned cooperate fully with the force and the international community provides the necessary resources.