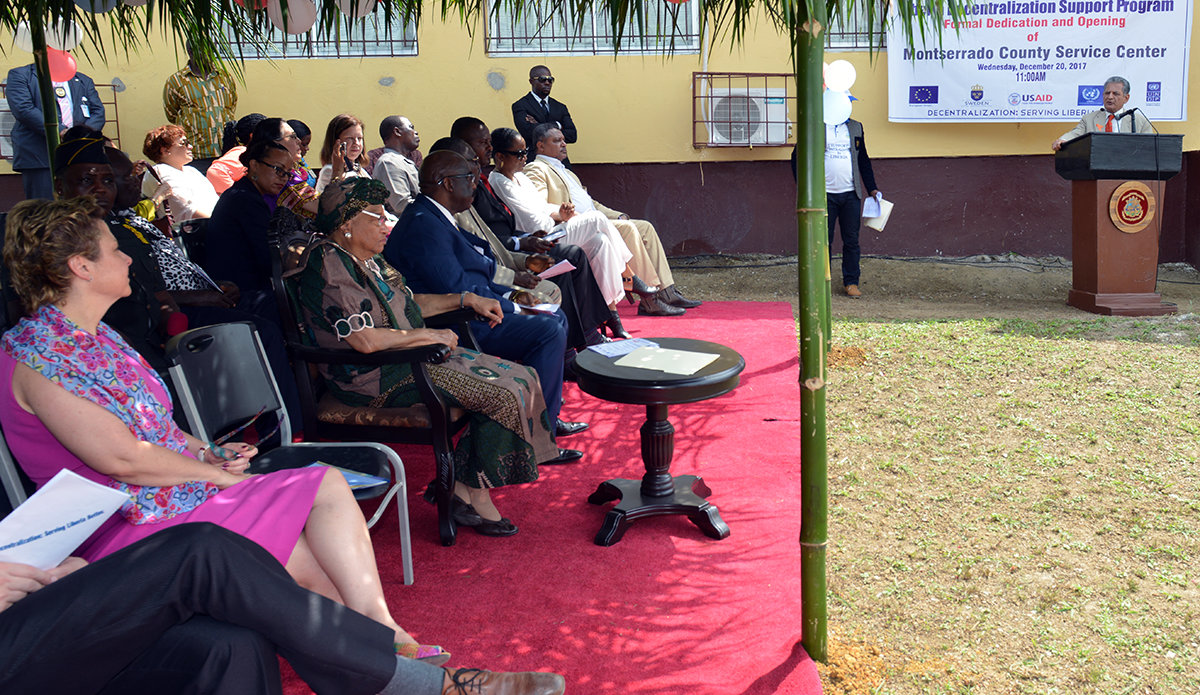 Special Representative of the Secretary-General and Head of UNMIL, Farid Zarif after addressing the attendants at the formal opening of the Monsterrado County Service Center in Bentol City. UNMIL supported the project through Quick Impact Project (QIP) ©UNMIL Photo: Shpend Bërbatovci

UNMIL’s Quick Impact Projects (QIPs) have been focused on implementing small-scale, rapid implementable projects which resulted in establishing confidence in the Mission, its mandate and the peace process, consequently improving the environment for effective mandate implementation in Liberia.

Since the inception of the Mission, UNMIL has implemented QIPs worth over 16 million U.S. Dollars in Liberia. QIPs over the years have provided the needed catalyst for mobilizing local community participation in building the peace and stability in the country. QIPs interventions supported peace, safety, stability, national dialogue and confidence building, structural and institutional reforms. It supported social cohesion and inter-religious cooperation; promotion and protection of human rights, including prevention of Sexual Exploitation and Abuse (SEA) and support to its victims; decentralization and delivery of services; civil society sector; has been addressing issues related to gender and environment; and strategic communication.

Examples of QIPS in the recent past, are projects supporting the conduct of free, fair and peaceful elections in Liberia in 2017, smooth political transition and projects addressing the deadly Ebola virus.

Following the planned drawdown, the Mission intensified its interventions in confidence building in the peace/stability process, in context of the political transition, and focused on promoting the good offices of the SRSG; strengthening governance and rule of law; reconciliation, capacity building and skills training.

QIPs provided a platform on which the Special Representative of the Secretary-General and Head of UNMIL, in accordance with his good offices and political support mandate, engaged with the stakeholders in the political transition, and encouraged peaceful and democratic establishment of the new political structures.

The impact of QIPs resulted in enhanced national capacity for constructive engagement in political processes for instance in elections, including in addressing political disagreements in a democratic manner, through dialogue and the mechanisms of the respective institutions. Ultimately, this actions led to acceptance of the fact that, as a result of the elections, there can be only one winning side, while at the same time Liberia is the biggest winner if the process of political transition concludes peacefully, with effective national governance.

Through these QIPS, the SRSG contributed to the national and regional peace, safety and security, strengthening the commitment of all stakeholders to have a peaceful transfer of political power in Liberia after the elections in 2017, with reference to the importance of adhering to the Farmington River Declaration.

As of 1 October 2017, a new QIP Policy has been introduced and UNMIL achieved full compliance with the respective policy as of November 2017.