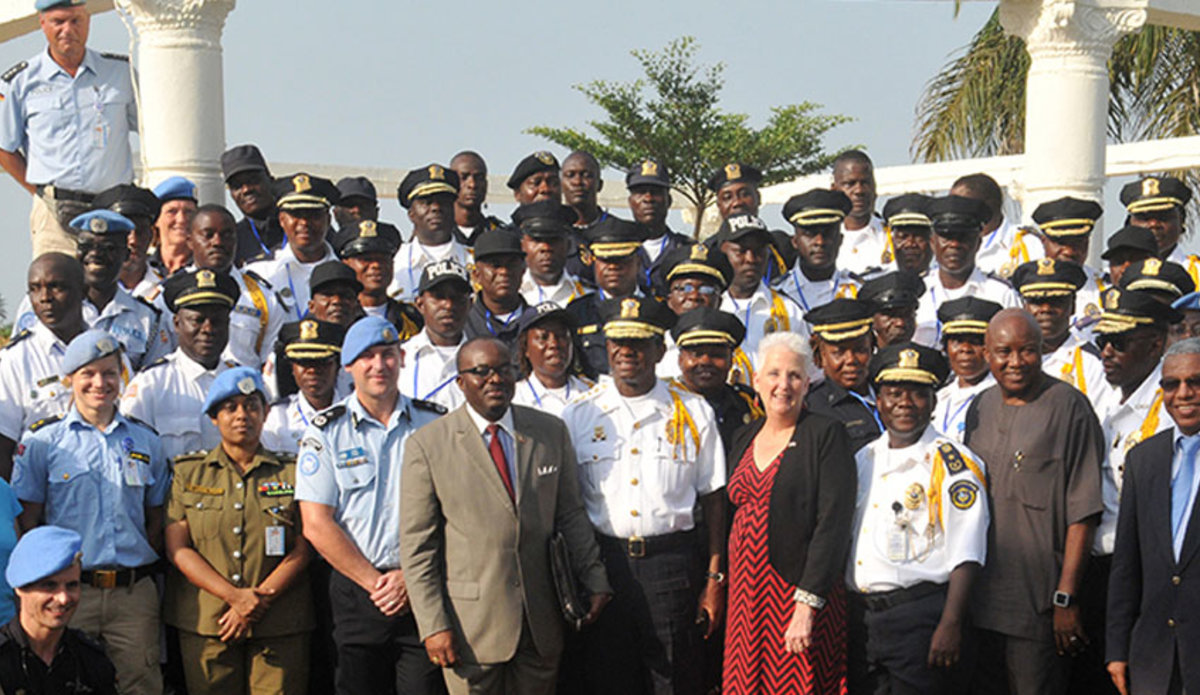 Members UN Police and Liberia National Police in a group photo with Justice Minister Sannoh and US Ambassador Malac at the end of a Security Sector retreat.

The UN Police has supported the operations of the United Nations Mission in Liberia (UNMIL) from onset in October 2003. The mission’s police component consisted then of up to 1,115 officers. The UN Police, including formed units, have continuously assisted in maintenance of law and order throughout Liberia, and provided backup to the Liberia National Police, when necessary. In addition, UN Police Advisors have served as mentors and provided daily advisory services to the Liberia National Police Headquarters and Training Academy, as well as co-located with individual police stations around Monrovia. The mission is currently implementing a phased drawdown of troops and gradual handover of security responsibilities to the Government of Liberia. UNMIL’s authorized strength will therefore be reduced to 606 police personnel by 30 June 2016.

In the implementation of its mandate, UNPOL are guided by the following fundamental principles:

The United Nations Police (UNPOL) component is commanded by a UN Police Commissioner assisted by a Deputy Police Commissioner. The current UNPOL Commissioner is Mr. Gregory Hinds from Australia and his Deputy is Mr. Cesar Hawthorne Binag from the Philippines. The overall UNPOL component is comprised of police officers from about 40 nations, including approximately 15% female representation.  In accordance with the current UN mandate, UNPOL’s authorized manpower stands at 498 police advisors, deployed in 30 team sites, including nine team sites in the capital city, Monrovia; and 998 armed police officers assigned in eight Formed Police Units (FPU’s).  Three FPUs are deployed in Monrovia and five are currently deployed strategically throughout the country.

The UN Formed Police Units represent the armed component within UNPOL.  The current FPU composition includes two FPU’s from India, two FPU’s from Jordan, two FPU’s from Nepal and one FPU from both Nigeria and China. One of the India FPU’s is made up of all female officers. The FPU’s support the Liberia National Police through: In addition to their operational support to the LNP, the FPU’s routinely engage in community outreach to strengthen public confidence in law enforcement. FPUs are helping UNMIL to make a difference within Liberian communities.

Some of the outreach programs undertaken are: The LNP was established by an Act of National Legislature assembled in 1956. The Act defined the functions and duties of the LNP as preservation of peace; protection of life, limb and property; recovery of lost and stolen property; arrest violators of the law; prevention and detection of crime; enforcement of all laws and ordinances; and testifying in court. The LNP, with support from UNPOL and other partners, has made significant progress in recent years including:

Bureau of Immigration and Naturalization (BIN)

BIN was created in 1955 via legislation that tasked BIN with enforcing the Aliens and National Law. BIN is comprised of 2,081 immigration officers, including officers deployed at 48 official border crossings points. To increase the number of officers to 3000, the BIN developed a Manpower Strategic Development Plan through which some 1000 Liberian men and women qualified to join the BIN of which 234 have already successfully graduated from basic recruit training.