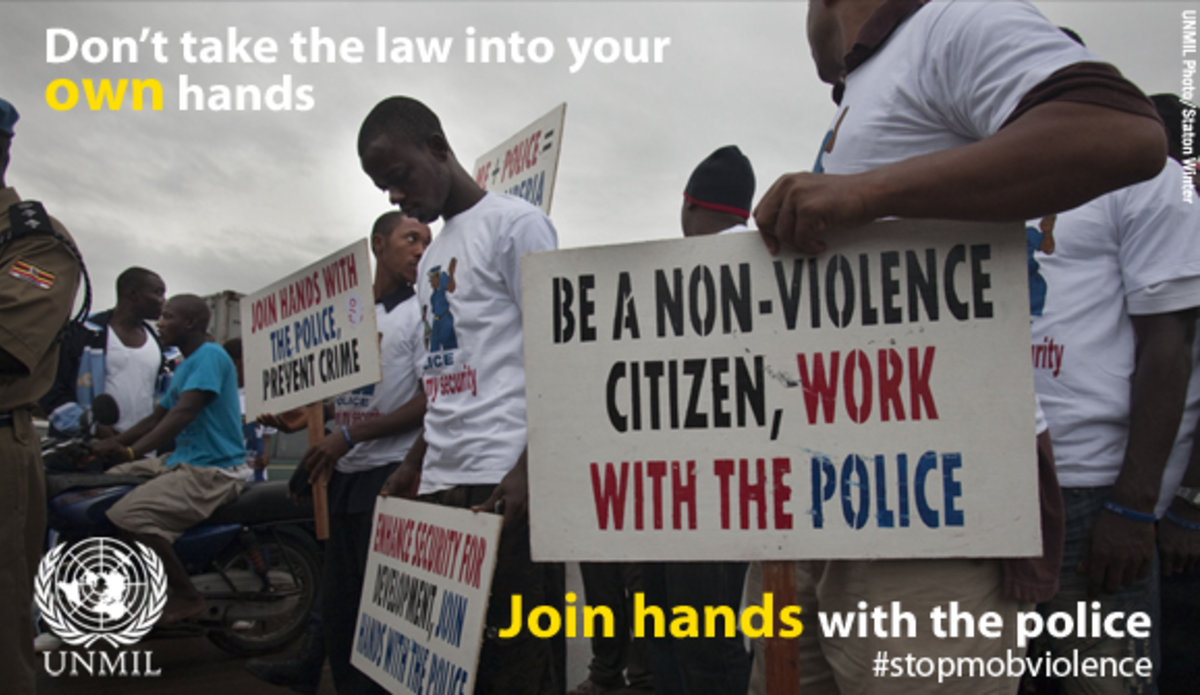 A campaign to end mob violence in Liberia

The Mob Violence Crisis in Liberia

There is a growing concern over an upward trend in mob violence incidents over the past year in Liberia. From January to September 2013, there were 46 reported mob related instances, up from 32 in the same period in 2012. This 44% increase is particularly disturbing as these activities are seemingly more violent, with a tendency to kill victims and turn against security forces who attempt to intervene. At least 12 victims were confirmed to be killed by angry mobs, while many others sustained serious injuries requiring hospitalization.

What is Mob Violence?

Since the end Liberia’s civil war mob has become a frequent occurrence for an alleged criminal to be literally lynched, sometimes to death, by an angry mob, including bystanders who simply have no inkling about the issue in the controversy or the person involved. All that is required to instigate mob violence is to simply shout rogue, rogue, rouge in a crowded area, and to point at somebody. Before the victim realizes what is happening, a mammoth crowd descends on him or her and the consequence is instant death, severe aggravated bodily injury.

Recently, community members, out of anger or frustration set a police station and a court houses ablaze in    Paynesville and Bushrod Island, under the erroneous perception that the establishment was shielding known criminals. It is criminal to engage in any illegal act, but it is also criminal to damage state infrastructures used for administration of Justice or to lynch a suspected criminal. There have been instances where the criminals themselves are smart enough to throw the chase away from themselves and direct the mob to an unsuspecting innocent bystander. An innocent person suffered because of the emotional reaction the public who could not wait for the police to act.

The law says that any person accused of committing a crime is presumed ‘innocent until proven guilty’ in a competent court which exercises appropriate jurisdiction on such matters and persons; and that an accused person is entitled to bail as a constitutional right, unless in capital offences or if the offence committed is a non-bailable offence. So people must understand this, and be patient to allow the system of jurisprudence play itself out.

Join us for the official Stop Mob Violence! launch on Saturday, January 25.
Download the programme here
Not in Monrovia? Show your support by tweeting #stopmobviolence! About the Campaign
On January 25, 2014, UNMIL is launching a 12-month multimedia campaign to stop mob violence in Liberia. In partnership with local authorities, we will be visiting communities across the country holding workshops, conducting dramas, and using flash teams to spread messages against mob-violence. We will also be using SMS, UNMIL Radio, and social media to spread messages against mob-violence. To find out more, follow us on Facebook or Twitter or contact us.
Print Email Twitter Facebook